It was borne from the closure of the SureStart  Family Centre that was based at the former Hampshire County Council run Phoenix Centre off Gore Road that shut a couple of years ago. The Ashley Family Hub is open to all local families, not just Ashley residents.

They are not a registered charity, but any funding for them would be ring-fenced by Ashley Infants School on their behalf. The hub supports families with children, often with SEN, health problems, or affected by DV, mental health issues, complex needs, or just needing parent support. They can signpost families to other services including domestic violence, Health Workers and other Support Workers.

There’s a 2-way referral system, and they collaborate with most agencies. Generally, its for families that are on the fringe with difficulties in life. Some of the courses they are offered include first-aid, baby massage, cooking on a budget. They would like to offer more services to more families with additional opening hours on more days of the week.

Working with partner organisations, the Ashley Family Hub aims to make the help and advice families need available in the community where they live. Further details are attached.

“I am delighted to be able to wave the flag for Ashley Family Hub this coming year, and to raise awareness as well as funding to support families with young children.” 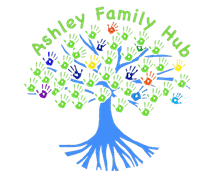